Whether you’re planting a tree for decoration, shade, or as a partition, all our trees share one thing in common; you’ll enjoy their company for many years to come. Moreover, trees both improve the appearance of our surroundings and have a major positive impact on our living environment and air quality.

Trees provide a healthy living and living environment. The temperature rises less quickly in a street or garden with trees. Scientists from Wageningen University even discovered that a single tree can have the same effect as 10 air conditioning units (https://edepot.wur.nl/351459). Trees stabilise the temperature by bringing moisture into the air through their foliage. This process of evaporation is called evapotranspiration. In addition, the leaves of trees provide much-needed shade, and their roots stabilise soil and retain water. This has a positive effect against flooding in the event of heavy rainfall, for example. In addition to all this, trees are great place for insects, birds and other animals to shelter. If you plant a tree in your garden, you stimulate biodiversity.

We’re surrounded by nitrogen, in fact about 78% of all air consists of this gas. Although nitrogen in itself is not harmful to people or the environment, compounds of nitrogen with other substances can be. One example is the group of nitrogen oxides (NOx). Nitrogen oxides can be released into the air through exhaust fumes and industrial emissions. Trees can capture these harmful substances. Besides nitrogen oxides, trees can also capture particulate matter. Did you know, for example, that woodland captures an average of 10 times as many particulates (https://edepot.wur.nl/249772) as low vegetation in an open field? Trees with large canopies are sometimes less suitable in narrow streets, because they can limit natural ventilation and actually increase the concentrations of pollutants.

A tree absorbs by far the most CO₂ of all plants. Global warming has been caused by a higher concentration of CO₂ in our air. This increase is in turn the result of burning fossil fuels, such as oil, natural gas and coal. The more trees there are, the more CO₂ can be captured, so trees are an important weapon in combating the climate crisis. It’s also important to remember that trees store CO₂, and once carbon is stored in the form of wood it no longer exacerbates the greenhouse effect. If a tree is felled, however, CO₂ is released again through the rotting or combustion of the wood. That’s why it’s important to preserve trees for as long as possible, so make sure you plant your tree in the right place and look after it well.

People need oxygen to live, and trees are great producers of oxygen, but how exactly does this process work? To create nutrients for itself, a tree first converts sunlight into energy in a process called photosynthesis. Special cells in the leaves (photosynthetic pigments) convert light energy into chemical energy. The tree uses this chemical energy to convert CO₂ and water into sugars, such as glucose. The waste product of this conversion is oxygen. 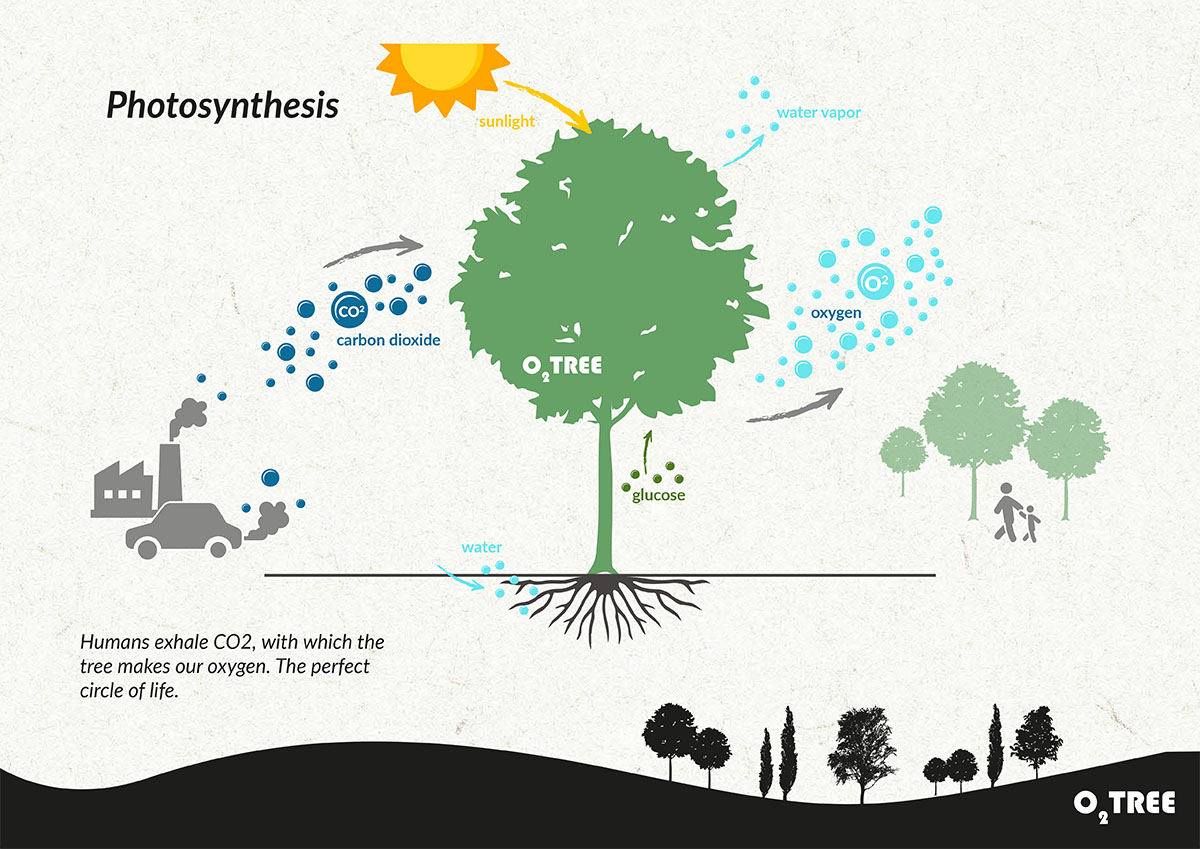 The extent to which trees can effectively purify the air of gases, particulates and organic matter depends on various aspects, such as the leaf shape, light intensity, wind, and air pollution.